One of the more fun studies I did during the beginning of my PhD. We had this pretty cool motion tracking lab at the Max Plank Institute. It had a trackable area of 12 by 9 meters, which is pretty big but still limited when compared to virtual worlds we may want to explore.

One key observation that had been made previously was that introducing gains during rotational and translational movement were still perceived as natural movement. This means if you add a multiplication factor on the speeds and angular velocities between the virtual world and the real world you trust the virutal one. Or to put it another way, if your proprioception (your sense of movement, e.g. how far you’ve turned your head) tells you one thing and your visual system tells you a slightly different thing you trust the visual system. 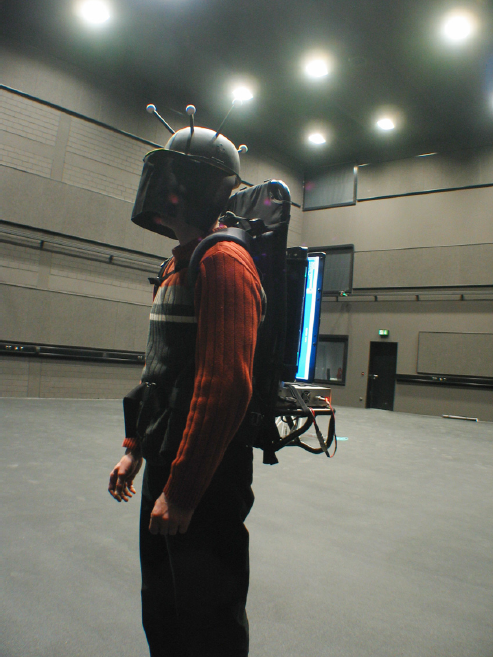 The VR helmet, goggles and tracking helmet. VR in 2008 was less sophisticated.

So, based on this I came up with the idea of introducing these gains dynamically. As you move through the virtual world, turn around and look around we introduce small discrepancies to warp the world around you and keep you from hitting the walls. I had to foce people to walk along meandering paths but the dynamic motion compression actually worked. You could walk along infinitely long paths without hitting any walls. 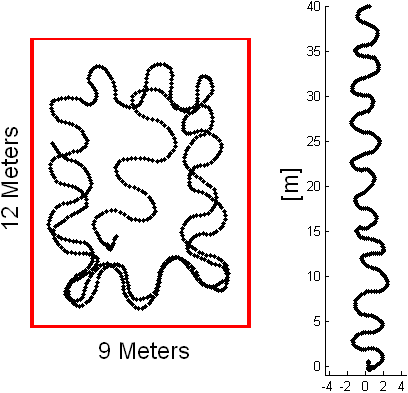 A subject walking along a meandering path that has been compressed in the real world (left) but appeared straight in the virtual world (right). Naive subjects were not able to detect the manipulation.

Experience indicates that the sense of presence in a virtual environment is enhanced when the participants areable to move through it. When exploring a virtual world by walking through it, the size of the model is usually limited by the size of the available trackable space. In this paper we propose a novel way to overcome this limitation by a technique we call non-linear motion compression. The central idea is to exploit the observation that subjects do not notice rotational gains (the ratio of rotational speed in the virtual and the real world) to bend the path of the participant at corners. This allows us to steer the subjects away from the physical walls during the exploration of the virtual environment, thus largely increasing the size of the explorable virtual reality. We present real world recorded data of subjects walking through virtual environments vastly larger than the tracking space.